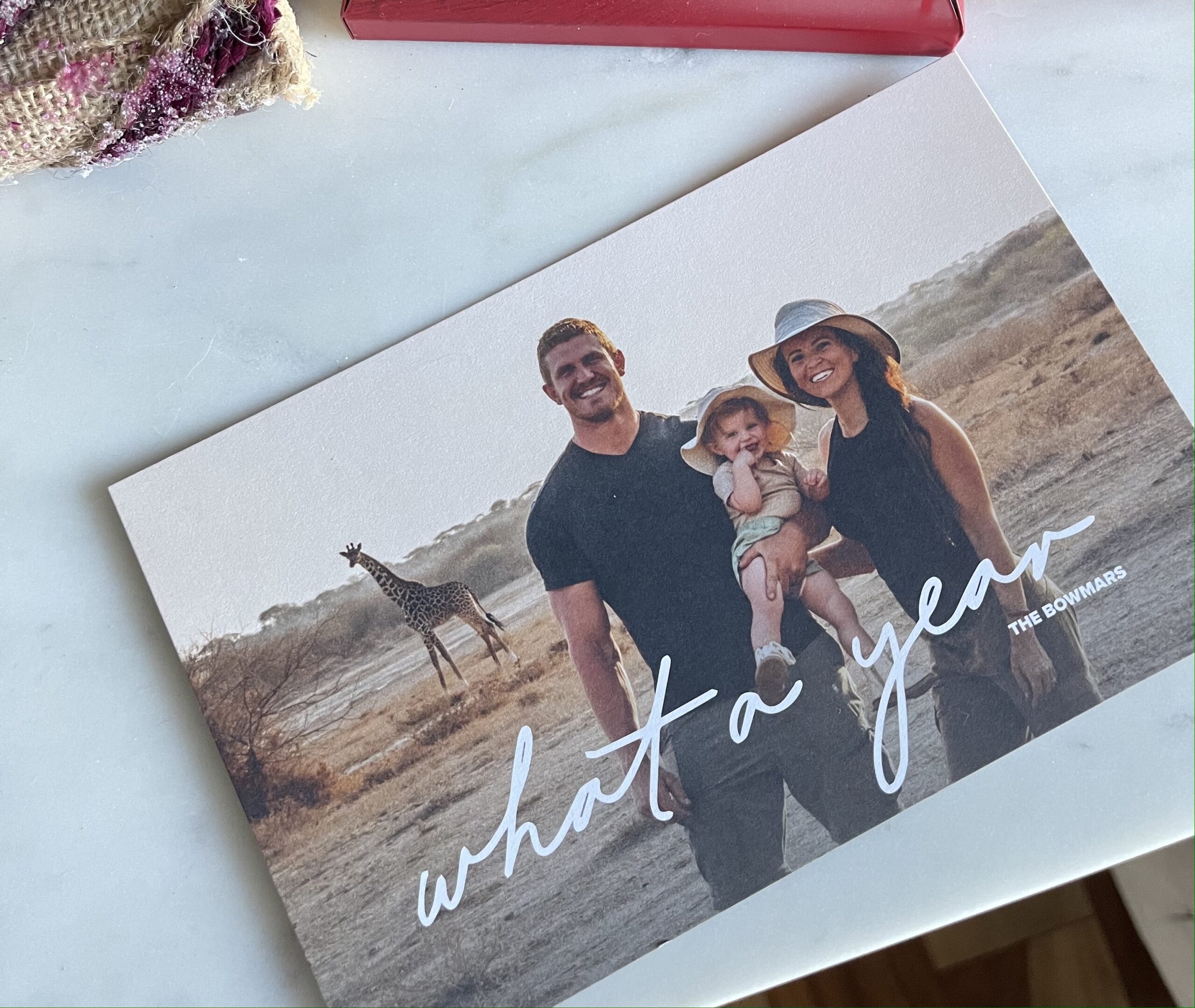 I recently put up a poll on Instagram asking if anyone else sends letters in their Christmas cards- it’s something my mom has done for years and I absolutely love reading them. I had hundreds of messages asking to share mine to get ideas!

This year truly was one of the best years of our lives! I am worried I won’t be able to condense it to an 8×11 sheet of paper but we will do our best!

In February, we took Oakley to Disney World with my mom, Jay (step dad), and sister Jessica. We spent several days in Orlando, went to Hollywood Studios, Animal Kingdom, and Magic Kingdom. Oakley turned six months old while we were there and it was such a magical time as the parks were barely operating at 10% capacity.

In late February, we went to Hawaii to celebrate both of our birthdays- we spent several days on Oahu and several days on Maui. We went hiking to waterfalls, took Oakley to the ocean and beach, went on a helicopter tour, visited the aquarium, went on a whale watching tour, and had some of the best seafood ever! Josh also came home with a ton of megalodon shark teeth that he was obsessing over like a little kid. March and April were chock full of finding deer antlers, turkey hunting, and watching Oakley learn how to roll back and forth and even start to crawl!

May was a spectacular month! Josh, Oakley, and I flew up to Anchorage, Alaska. Josh went on to the peninsula in the Bering Sea for a grizzly bear hunt and Oakley and I stayed in Anchorage where my mom, Cassie, and Jessica flew up for the week with us to explore Alaska. We drove to Valdez which is a seaside town about 5 hours outside of Anchorage, drove to Denali, went on countless hikes, had some amazing sight seeing experiences, saw a few moose, and ate amazing food such as reindeer meatloaf and blueberry cream soda.

In June we went on our annual bow fishing trip to Lake Erie. We stayed on Put-In-Bay Island for almost a week and then took Oakley to Cedar Point with her cousins! Oakley also started baby back float swim lessons in June too! We then went to Las Vegas for our Bowmar Nutrition athlete trip (took Oakley, of course), and found out we were expecting while there! It was extremely difficult to keep it a secret the entire time from everyone!

July was an absolutely crazy month. Josh was scheduled to leave on a 55 day trip to Africa. We knew his passport would expire while he was there and we expedited it in early May to be in time for the trip. Unfortunately it wasn’t in by the time he was supposed to leave, so we enlisted the help of both Iowa representatives, and somehow got the passport several days after his trip was to begin. We shifted some things around and he left for Tanzania at the end of July. Oakley and I headed down to Marco Island for a family trip with my mom, Jay, sisters, nieces, and nephews. What an absolute blast to spend time at the pool, beach, had a girls spa day, and had amazing food too!

In early August, Oakley turned ONE! The day after her one year check up, we left for Tanzania as well! We were there for almost 30 days and it truly was one of the most incredible trips of a lifetime. We also found out, while we were there, that we are having a BOY! Additionally, we were able to do our pregnancy announcement and gender announcement while we were there too. Don’t worry, all of the hunts will be on YouTube soon!

September through basically now have been focused on farm work, deer hunting, and gearing up for baby boy- due late February! Josh and I have both had the best deer season of our lives, Oakley has been able to be in all of our photos with us, and we are loving the time being home. I also bought 15 chicks, we built a chicken coop, and I am becoming obsessed with bread making!

We hope the holidays bring you all the warmth and cheer and we wish you a happy 2022!