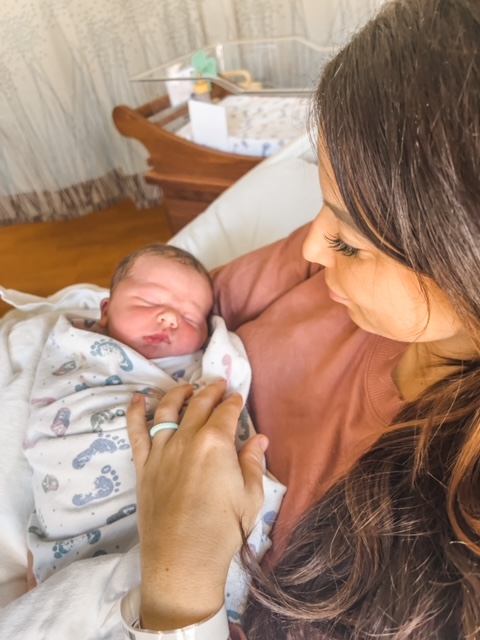 What an incredible experience of delivering my son, Dean Wild! To say the experience was night and day different compared to my daughter’s birth story would be an understatement. I have been taking notes and will do my best to share everything as I know how much people love birth stories (myself included). I hope nothing I say triggers or scares anyone, simply sharing my experience! That being said, I would like to say there is a trigger warning at the end of this story after the delivery. If you are sensitive at all, this is your warning.

I stated losing my mucus plug on February 17 and thought for certain I would go into labor on my own. My due date for our son was February 28. I had to be induced with my daughter at 41 weeks and the same needed to happen with my son on March 7. Luckily, unlike with Oakley, we were able to come in to the hospital in the morning instead of at night. I also didn’t need any cervidal with Dean like I did with Oakley. We started the induction around 8:00am with a blood draw (for hemoglobin and other levels), an IV with pitocin, and the world’s most amazing nurse who also happened to be an amazing birth coach (that I did not plan for but wouldn’t have been able to do it without her).

While I didn’t have a birth plan other than “healthy mom and healthy baby”, I really wanted to birth without an epidural for this one as I did get an epidural with Oakley. As always, there’s little no shame in an epidural, modern medicine is a beautiful thing. I knew it would be challenging given the induction but I was determined to labor as long as I could. I had the world’s best nurse that stayed with me the entire time and helped me through the entire labor process. There weren’t a lot of births happening Monday so I had a dedicated nurse the entire time. She certainly was more “old school” but was so encouraging and empowering. She kept reminding me that no one has ever died from pain and each contraction was one less I would have to go through.

My pitocin was started at 8:00am and the doctor broke my water at 8:40am. I was about 2-3cm when my water was broken and I was having small uterine contractions as soon as I was hooked up to the baby monitor, so there was a strong possibility he was going to come a few days after my induction but definitely not something I, nor my doctor, wanted to chance. From about 8-1030am, my contractions were extremely, extremely mild and infrequent. We switched positions about every half hour from leaning over the bed, bouncing on the ball, sitting like a frog, walking around in the room, etc. At 11 I laid on my right side with the peanut ball for half an hour and then my left side with peanut ball.

We did this for two hours to help shift the pelvis and get the head even lower. At about 11, my contractions started getting more painful, intense, and frequent (roughly 45 second contractions every two minutes). I was stuck at 6-7cm from about noon to 1pm and was in a very dark place mentally. Laboring without an epidural was the hardest thing I have ever done in my life, hands down; especially given the induction process. I told my nurse I didn’t think I could keep doing it without an epidural but she told me I was progressing too quickly and it was too late so I needed to find the right mental space to get through it. She kept reminding me, over and over, that I was capable of doing it and each contraction was one less contraction I had to do.

Around 1:30 I was finally about 9cm and the doctor was called in to check me to see if it was almost time to start pushing. She said there was a small amount of cervix still in the way so I had to wait a little longer. It felt like an eternity but Josh was gowned up and ready to pull the baby out, just like he did Oakley. I started pushing at 2:06 and baby was born at 2:16 after 9 pushes. He did have his cord wrapped around his neck but everything was fine as once he was put on my chest. I was extremely overwhelmed with emotion and pain. We did skin to skin and delayed cord blood clamping but I wanted to enjoy my time with him without being so over stimulated. I did tear and needed stitches and I was also having very severe postpartum cramps during that time as well. Baby was being cleaned and measured and Josh did skin to skin with him until I was stitched up and felt safe holding him. The contractions after delivery were just as intense as my labor pains and I was very concerned with holding him with my body was going through that.

I did feel like something was wrong and I expressed that to my nurses and doctor. I lost quite a bit of blood during labor (875ml) and 220ml within the first hour of recovery. My doctor said that was on the higher side for where she wanted me to be so we had extra monitoring during the first few hours after delivery. I was checked every 15 minutes an with every contraction, was losing more and more blood. I ended up needing a second bag of pitocin around 4pm as I was cramping and bleeding with each contraction. Due to the additional blood loss, I was started on a bag of TXA to assist with blood clotting and was on that for about an hour.

Around 6pm, a new nurse came in that was taking what I was telling her very, very seriously and she told me she was going to push on my stomach (fundal massage) harder than anyone else had, which is not what I wanted to hear. When she did, I almost threw up in pain but she expelled 865ml of blood clots with two pushes. I can’t even being to describe the feeling of all of that coming out of my body. I was again overwhelmed with emotions and just so grateful Josh was holding Dean the entire time as I was experiencing that. As soon as she expelled the clots, I didn’t have another single contraction or cramp. With the amount of blood loss, several other doctors came in to check on me during the next few hours. My nurse told me later she had to keep a poker face but she was very concerned as it was happening and too was grateful that Josh had the baby the entire time.  I was monitored for an additional few hours and my stomach was pushed on every 15 minutes to ensure nothing else needed to come out. I lost almost 2 liters of blood between 2pm and 6:30pm and my hemoglobin plummeted from 12.6 to 7.6.

To say I was petrified would have been an understatement. If I had lost anymore blood, I would have needed a transfusion so I am just so blessed and grateful that I did not have to go down that path as part of my postpartum journey and healing. Dean slept great through the night and we were all able to get pretty good sleep, given it was our first night together. I did end up having a very depilating headache in the morning due to the low hemoglobin and being very dehydrated. Was it perfect? No. Did I expect it to be? No. But I would do it a million times over! And now we are on the road to recovery, healing, and learning how to do this thing as a family of four!